Catullo in W.C. Of Termini Station

In two pay toilets on the basement floor of Termini Station, after going down the steps, to the left and right of the big shopping area (extending from the side off Via Giolitti to Via Marsala), a phrase in Latin appears, in Times New Roman capital letters. This is the phrase:
QUOD DICIT IN VENTO ET RAPIDA SCRIBERE OPORTET AQUA
It is a verse from Elegy number 70 by Catullus, but it is wrongly quoted.
In Elegy number 70 by the great poet we read the following stanza:


My woman says that she prefers to be married to no one
but me, not even if Jupiter himself should seek her.
she says: but what a woman says to her passionate lover,
she ought to write on the wind and swift-flowing water.

This sort of verse appeared up above on the tiles, just under the ceiling. In the toilets for men and women (I checked the latter when the attendants were momentarily distracted). They have taken out some words, who knows why: "sed mulier cupido" and "amanti". You might think there is no room. Absolutely not! There is all the space you could need, and the absurd phrase is repeated several times. The translation would be “what is said (by whom?) write it in the wind or water that flows swiftly”. What does this have to do with the station toilets? It is totally absurd. And then there is the way they have arranged the letters (made of aluminium) on the walls! Something that even the most daring avant-garde poet would not have managed: "SCRIBE/RE/ OP/ORTET/ A/Q/UA". Maybe it was a play on the graphics of the words with that type of character, taking a chance quotation in Latin, without any concern for the meaning. It might have been Virgil, Horace, Lucretius, anyone. The Latin, first of all. Something of course widely used at Termini Station. Catullus in the toilet is not all that refined. But it doesn’t matter. It put me in a good mood to go there to take a leak. It really deserves a visit. And costs just one euro. 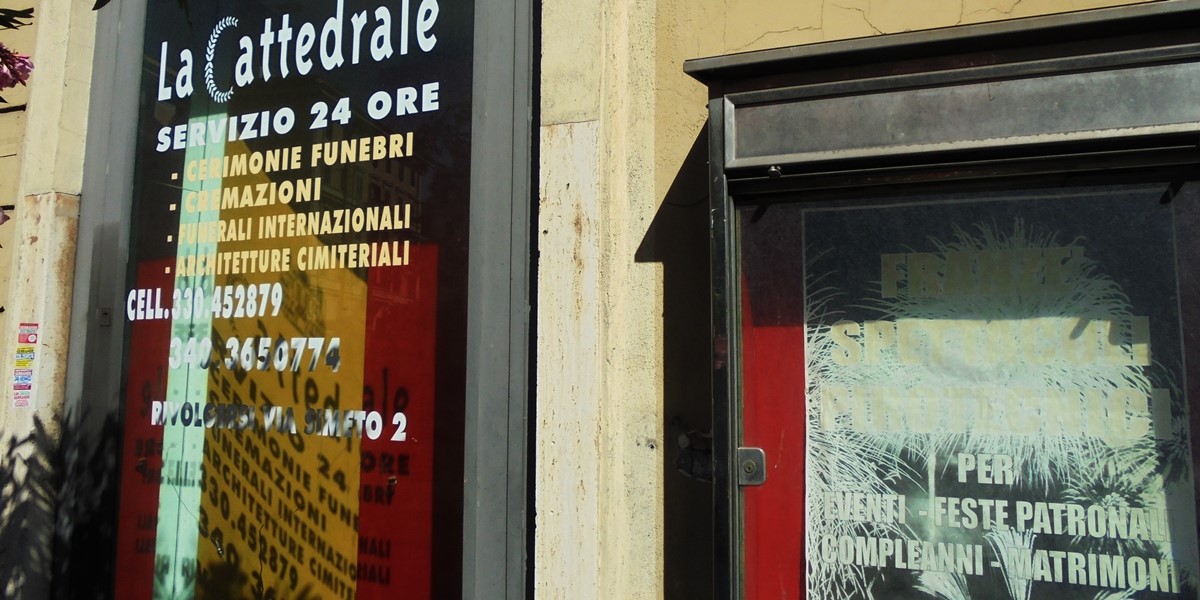 Beside the tiny funeral parlours window, you may still be able to see a poster regarding the organisation and arrangements for parties, weddings, christenings and so forth. Will the undertakers have put this old-ish poster and left it there on purpose? Are we dealing with philosophers who wish to make us meditate on the constant moodiness of the universe? Or else, and this is more likely to be so, they have not even noticed it, and if they have, they simply don’t give a damn about it.

Why on earth did the Witnesses of Jehovah have this tree cut in such a peculiar way?